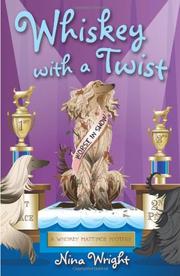 WHISKEY WITH A TWIST

Corpses pile up at a steady rate when bad dogs happen to bad people.

Michigan realtor Whiskey Mattimoe (Whiskey and Water, 2008, etc.) has her reservations when Susan Davies invites her to be the Bad Example at the Midwest Afghan Hound Specialty show. But Susan’s developer husband Liam has just signed a deal with Mattimoe Realty to market his upscale homes. So Whiskey schleps her bitch Abra and her eight-year-old neighbor Chester—right after he whips up a batch of pancakes for Whiskey, who doesn’t cook, and Whiskey’s ex, Jeb Halloran, who’s back on the scene offering her much-appreciated sex—out to Elkhart, Ind., to show Susan’s snooty breeder friends how not to groom. Chester’s family’s man-of-all-work, MacArthur, whose personal services Whiskey also desires, accompanies her as bodyguard. And her body turns out to need guarding, since Mitch Slater, the first breeder she meets, is shot dead seconds after putting the moves on the irresistible heroine. Someone also takes a pot shot at Ramona Bowden, Susan’s co-breeder, and kills handler Matt, Mitch’s son. Worse, Abra runs off, pursued by Susan’s champion Silverado. Even worse, Susan starts showing way too much interest in country-western crooner Jeb’s pipes.

Why someone who craves every guy she sees, views every woman as a rival and lets an eight-year-old do her housekeeping would see herself as a whip-smart babe rather than a lazy floozy is anybody’s guess. Even one taste of Whiskey leaves you longing for the return of Prohibition.