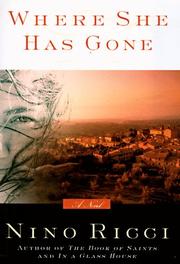 WHERE SHE HAS GONE

This beautifully written, quietly moving story impressively completes Italian-Canadian novelist Ricci’s autobiographical trilogy (The Book of Saints, 1991; In a Glass House, 1995). In those previous installments, Ricci chronicled, in painstaking and often painful detail, the childhood and youth in the Italian village of Valle del Sole of Vittorio Innocente; his passage to North America with his mother Cristina, a disgraced adulteress who died while en route to a promised reconciliation with her betrayed husband; and the difficult adaptation to life in Toronto made by “Victor” (his name now Anglicized), his embittered and exhausted father, and Victor’s half-sister Rita, Cristina’s bastard daughter, who was adopted and raised by a neighbor family. This final volume brings Rita and Victor together, when his father commits suicide and her adoptive family separates. Their unexpected intimacy propels Victor into a rigorous self-examination—and a return to his homeland in hopes of learning the truth about his mother’s “sin” and the identity of Rita’s father (about which he already has suspicions). The shocks that are in store for him effectively estrange Victor/Vittorio as much from his own identity as from those he feels compelled to love, but this skillfully plotted story nevertheless ends on a credibly hopeful note, following a powerful climax in London—midway between its protagonist’s two “worlds.” Ricci, a former president of PEN Canada, is a superb stylist whose unpretentious prose carries an emotional charge that gathers so slowly and surely that we’re surprised to find ourselves so moved by his characters’ stoically borne crises. And his use of symbolism is especially deft (the presence of antiquarian relics scattered around Villa del Sole, for example, subtly mocks the elusiveness of Victor’s own buried past). An extended work that rivals Pat Barker’s much better known WWI trilogy, and a saga of the immigrant experience that is unrivaled in English (and, very likely, Italian).