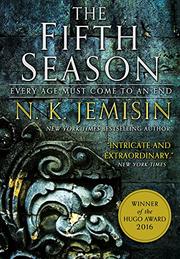 From the The Broken Earth series, volume 1

In the first volume of a trilogy, a fresh cataclysm besets a physically unstable world whose ruling society oppresses its most magically powerful inhabitants.

The continent ironically known as the Stillness is riddled with fault lines and volcanoes and periodically suffers from Seasons, civilization-destroying tectonic catastrophes. It’s also occupied by a small population of orogenes, people with the ability to sense and manipulate thermal and kinetic energy. They can quiet earthquakes and quench volcanoes…but also touch them off. While they’re necessary, they’re also feared and frequently lynched. The “lucky” ones are recruited by the Fulcrum, where the brutal training hones their powers in the service of the Empire. The tragic trap of the orogene's life is told through three linked narratives (the link is obvious fairly quickly): Damaya, a fierce, ambitious girl new to the Fulcrum; Syenite, an angry young woman ordered to breed with her bitter and frighteningly powerful mentor and who stumbles across secrets her masters never intended her to know; and Essun, searching for the husband who murdered her young son and ran away with her daughter mere hours before a Season tore a fiery rift across the Stillness. Jemisin (The Shadowed Sun, 2012, etc.) is utterly unflinching; she tackles racial and social politics which have obvious echoes in our own world while chronicling the painfully intimate struggle between the desire to survive at all costs and the need to maintain one’s personal integrity. Beneath the story’s fantastic trappings are incredibly real people who undergo intense, sadly believable pain.

With every new work, Jemisin’s ability to build worlds and break hearts only grows.