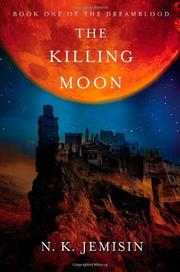 In the city and state of Gujaareh, the Hetawa temple is dedicated to Hananja, goddess of dreams, and its priests harvest the people's dreams to create dream-magic to heal wounds and cure ailments. The Hetawa's elite Gatherers also ease the passage of the dying—and kill those judged corrupt. When Gatherer Ehiru is ordered to kill Charleron, a corrupt outlander, somehow his flawless technique goes awry; Charleron dies in agony but not before hinting that something is gravely amiss in the Hetawa. Shaken, Ehiru finds he can no longer function as a Gatherer and goes into seclusion, watched over by his young apprentice, Nijiri—until Ehiru receives orders to kill Sunandi Jeh Kalawe, the "corrupt" ambassador from neighboring Kisua. Sunandi bravely defends herself and reveals that her predecessor and adoptive father passed to her a dreadful secret involving war, murder and, perhaps, Eninket, Prince of the Sunset Throne—who happens to be Ehiru's brother. Though all the signs point towards the Hetawa—innocent dreamers are being murdered by an insensate, renegade Reaper—Ehiru cannot believe that the priesthood itself is corrupt. Nevertheless he agrees to help Sunandi unravel the conspiracy. Though a little too heavily dependent on the intricate details of Gujaareh's religion, Jemisin's patient worldbuilding and extraordinary attention to detail help frame and propel the complex plot, and she weaves subtle, emotionally complex relationships between the main characters. The text includes a useful glossary but, alas, no maps.

Tends toward the claustrophobic at times, but superior and fulfilling.