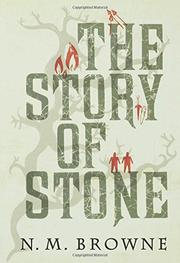 THE STORY OF STONE

In a complex fantasy with mythic overtones and strong themes of love and guilt, a magic stone imparts visions that link ancient male- and female-centered cultures to their far-future hybrid descendant. Each time would-be archeologist Nela touches a black pebble turned up at her father’s dig, she witnesses scenes from long ago in which Jerat, a young warrior desperate to save his dying younger brother, forces Moon-Eye, an enchantress of the forest-dwelling Night Hunters, to sing a spell that actually remakes the world in the image of the singer’s heart’s desire. But it all goes wrong, for Moon-Eye has fallen in love with Jerat, and Jerat with power—and the magic’s misuse lays a killing blight on the whole land that is still active in Nela’s time. The tale suffers from a lack of balance, as Jerat is so dominant a character that the others come off as a thin supporting cast, and the tale’s slow-building emotional pressure is blown off in a too-quick and easy climax. Still, some strong writing and a setting containing three vividly nuanced invented societies will carry readers along. And—how rare—it seems to be a stand-alone. (Fantasy. YA)