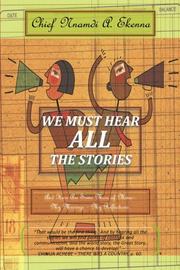 WE MUST HEAR ALL THE STORIES

And Here are Some More of Mine:- My Musings - My Reflections

A man shares the stories of his life to inspire and help others.

Following up Growing Tall Amidst Obstacles (2014), his debut, Chief Ekenna continues to reflect on moments from his childhood in Nigeria and subsequent career as an attorney in Los Angeles. As with his first book, the influence of Chinua Achebe can be felt in nearly every passage, and Ekenna recognizes him as the source of this book’s title and guiding principle. “If an unseasoned, and weak, and unaccomplished, and unsung, person like me steps up to Achebe’s challenge, and tell[s] my story, that will do a bit ‘more’ in encouraging others,” Ekenna writes. He weaves stories from his life with emails, quotes from other authors and even the lyrics to TV commercial jingles—finding them all equally inspirational and worthy of philosophical discussion. He begins with the death of a dear friend; in facing the senselessness of the situation, he finds all the more reason for everyone to share their stories, great and small, while they have the chance. “If you find the courage to change the way you look at things, the things you look at will find the courage to change,” he writes. Despite his intriguing immigrant background, Ekenna mostly chooses to look at small, specific moments from his life—a banal conversation with a woman on a plane, a car accident on the local news, the memory of a felled tree blocking a road, etc. Each moment is dissected at length and used to derive the life-affirming adages he shares with the world: e.g., “Change is possible. Anything is possible.” Some of these observational stories are engaging—particularly a humorous linguistic mix-up central to his first legal case in Nigeria—but many of them lose their potential impacts by being weighed down by tangents and diversions to other writings. Ekenna intends to show that there is value in every story—a striking point, but not all these stories live up to his ideals.

A collection of stories and philosophical musings that struggles to find a decent balance between narrative and introspection.