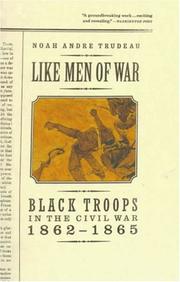 By National Public Radio producer Trudeau (Out of the Storm, 1994, etc.), another solid contribution to Civil War literature, this time about the experience of the so-called Colored Troops, who fought on the Union side. In recent years, films and books, particularly Joseph T. Glatthaar's Forged in Battle, have focused scholarly attention on the once-neglected exploits of the more than 175,000 black troops who fought in the Civil War. In an account more thorough and expansive than Glatthaar's, Trudeau shows little-known varieties of black military experience: Amazingly, free blacks in the South offered their military services to the Confederacy at the war's outset, before the North made abolition one of its wartime goals, and blacks in the multiracial areas of Louisiana and the Trans- Mississippi had well-developed military traditions dating back to the War of 1812. The Confederacy never made use of blacks as soldiers, however. Well before the final Emancipation Proclamation, units of back US troops were being sent into combat. Trudeau describes how, unreasonably, Northern editors and military men repeatedly asked whether the former slaves could fight as well as white men, even after units of the ``US Colored Troops'' had proved that they could. Trudeau compellingly captures many of their actions in detail, including moments of glory, like the capture of Fort Fisher by black troops on Jan. 15, 1865; moments of tragedy and bravery, like the failed July 18, 1863, assault on Fort Wagner; and moments of savagery, like the massacre of black soldiers at Fort Pillow by Confederates under Gen. Nathan Bedford Forrest on April 12, 1864. Trudeau also traces the curious historical fate of the African-American soldiers after their mustering out: In the revisionist historiography and racist culture of early 20th centry America, they were forgotten, and even in African-American culture and literature, their achievements were neglected. Another fine work by Trudeau, and a good companion to Glatthaar's study.