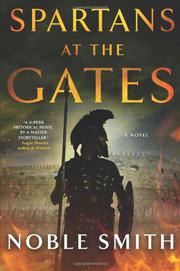 SPARTANS AT THE GATES

From the Warrior Trilogy series, volume 2

In the second volume of his Warrior Trilogy (Sons of Zeus, 2013), Smith’s young warrior, Nikias, makes a perilous journey to seek aid from Athens to help defend the city-state of Plataea from the Spartans.

Nikias carries gold, treasure he purloined from a traitor when Thebes besieged Plataea. Now he’s set off to hire mercenaries, a journey he’s making without the approval of his powerful grandfather, Menesarkus, the Arkon of Plataea. As Nikias rides across the Oxland countryside, he’s attacked by Dog Raiders, anarchic rogues with the habit of skinning the faces of their victims. Whatever else is to be had from this Greek swashbuckling adventure, there’s plenty of gore—swords lopping limbs and skin peeled by "sticking fire." Much of the story covers Nikias’ adventures along the way to Athens; the schemes and perils he faces in the city; and then his journey home via oar-powered galley. Characters are archetypes—hero on a quest, back-stabbing blackguard—but Smith employs excellent research skills to populate the narrative with entertaining historical factoids about food, sex, dress—some of the best centering on Spartan life and ethos—not to mention the assorted duplicities and fragile political alliances among the city-states. While not quite herculean, Nikias is a hero extraordinaire, adept at hand-to-hand combat and able to pluck out an eye with a long, braided leather whip. Nikias loves Kallisto, a traitor’s daughter whose father’s perfidy stands in the way of their marriage, but he’s also easily seduced by Helena, a hetaera, or courtesan. While this second of the trilogy is a formulaic action story overlaid on an era more recognized for art, philosophy and science, it’s easy to follow for readers unfamiliar with the previous volume.

Something different for historical fiction fans.