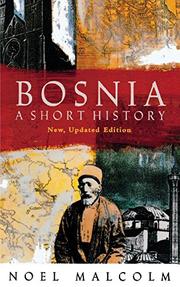 A useful and brief, but comprehensive, history of Bosnia from earliest times to the brutal present. Until its virtual dismemberment in the past three years, Bosnia was a unique political and cultural crossroads, a product of four great empires (from Rome through Austro-Hungary) and four major faiths. Some pundits suggest that this last situation is the one that has caused the small country so much grief, but in his tracing of Bosnia's history, Malcolm, a political columnist for the Daily Telegraph, thinks otherwise. He says that the lesson of history is ``not that Bosnia had to be kept in check by a larger power to prevent it from destroying itself from within, but...what had always endangered Bosnia was...the ambitions of larger powers and neighboring states.'' Although the truth of this statement applied to the familiar recent history is transparent, most readers will be less well acquainted with the events that led to Bosnia's current state. The book traces this history, full of upheavals and a swirling mix of ethnic and political tensions, methodically if a bit drily. Throughout, Malcolm makes the point that almost everything that occurs in Bosnian history gets interpreted to suit somebody's nationalist schema; to his credit, he is extremely careful in balancing claims and interpretations for the period leading up to this century. When the more familiar events of the First and Second World Wars, the Cold War, and the break-up of Yugoslavia in its aftermath, are reached, he is no less candid in expressing his own point of view, sympathetic to Bosnia, outraged at the manipulations of Milosevic, Karadzic, and the gangsterlike apostles of Greater Serbia and the criminal stupidity with which the EC and the US have handled the situation. A very serviceable introduction to a complicated history.