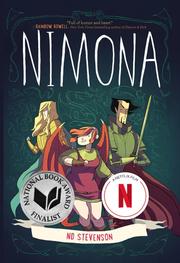 A not-so-bad villain fighting against a not-so-good hero teams up with a spunky shape-shifting heroine in a cleverly envisioned world.

Nimona, a plucky, punk-tressed girl, is determined to be the sidekick of the nefarious (in name only) Ballister Blackheart, the sworn enemy of the Institution of Law Enforcement and Heroics and their sporran-sporting champion, Sir Ambrosius Goldenloin. Blackheart, intrigued by Nimona's moxie and ability to shape-shift, takes her on, and the two decide they're going to take down the Institution. Nimona and Blackheart learn that the supposedly benevolent Institution has been hoarding a great quantity of a poisonous plant, jaderoot. As they delve deeper into its inner workings, they soon find that the lines that separate good and evil aren't simply black and white. Stevenson's world is fascinating: an anachronistic marvel that skillfully juxtaposes modern conventions against a medieval backdrop. Imbued with humor, her characters are wonderfully quirky and play with many of the archetypes found in comics. The relationships among her characters are complex and compelling: for an antihero, Blackheart dislikes killing and mayhem, while Goldenloin is not averse to cheating and trickery. Stevenson's portrayal of the relationship between good and evil is particularly ingenious, as is her attention to detail and adroit worldbuilding.

If you’re going to read one graphic novel this year, make it this one.