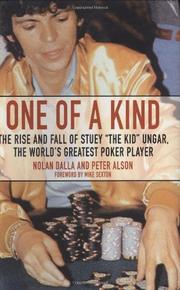 ONE OF A KIND

The Rise and Fall of Stuey “The Kid” Ungar, the World’s Greatest Poker Player

What began as a ghostwritten autobiography of the most feared tournament player in poker history became a biography by default when Stuey “The Kid” Ungar’s dope habit finally killed him.

He was to the manner born: his father was a bookie and loan shark on Manhattan’s Lower East Side, and young Ungar knew all about gambling long before the Lottery and OTB. But he brought something special to his milieu: a natural card sense aided by a fantastic memory and mixed with a risk-taking persona. He was like a gladiator on the green felt, write gambling-journalists Dalla and Alson (Confessions of an Ivy League Bookie, 1996) in this jumpy if dispiriting account. By the time of his bar mitzvah, he was wired in and wired up: “What good was a fucking Treasury bond to me? Was I gonna be able to take that to a dice game? Give me the cash.” His genius was gin, but he made his fortune at poker, where he won the World Series of Poker three times. As mesmerizing as he was at the poker table, however, he was also a rough piece of work (as seen particularly through interview snippets with Dalla, originally his ghostwriter): rude, derisive, a poor winner and a worse loser, a man-child who had been insulated from the mundane tasks of everyday life, incapable of responsibility. The money came and went, won at the card table—and the table action described here is excellent stuff—then lost at the track or ballpark. The fame and the money, the authors suggest, along with Ungar’s loneliness and insecurities, resulted in a severe cocaine habit, so severe it collapsed one side of the nose when passageways had dissolved. Ungar took to crack as an alternative. The story gets more and more awful, until Ungar dies in 1998, at age 45, in a vomit-splattered motel room.

The gambler made into an object of fascination, absolutely dazzling from a distance, increasingly noisome the closer you get.