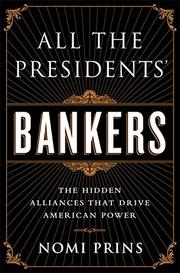 ALL THE PRESIDENTS' BANKERS

A revealing look at the often symbiotic, sometimes-adversarial relationship between the White House and Wall Street.

When it comes to the tactics of modern bankers, former Wall Street insider–turned-journalist Prins (It Takes a Pillage: An Epic Tale of Power, Deceit, and Untold Trillions, 2009, etc.) makes her disapproval known in no uncertain terms; their predecessors fare only slightly better in this sweeping history of bank presidents and their relationships with the nation’s chief executives. The narrative begins circa 1900, when bankers began to supersede industrial tycoons as the nation’s most powerful private-sector prime movers. Financial titans like J.P. Morgan and John D. Rockefeller figure prominently, along with lesser-known but equally important men like Winthrop Aldrich and Thomas Lamont, as they navigate the treacherous terrain of World War I and the 1929 crash, both butting heads with and coming to the aid of presidents from Theodore Roosevelt to Herbert Hoover. As Prins writes, ties proved strongest during wartime, with banks working alongside politicians to sell bonds and bolster the finances of U.S. allies. As the 20th century rolled on, however, power shifted north from Washington to New York, where deregulation and globalization created opportunities for bankers to create complex financial products that neither the public nor they themselves seemed to fully understand, which led to a series of market collapses and global recessions. Even wars in Iraq and Afghanistan have not been enough to galvanize the banking industry as prior wars did. At times, the author talks over the heads of a general audience, and her anti-banker bias, even if it’s largely justified, cries out for some balancing commentary. Still, this is a valuable contribution to a growing body of books trying to make sense of an increasingly complicated financial world. The glossary of financial terms will prove helpful for general readers.

A dense but worthy effort to explain how the economy went off the rails in recent years—and how we ended up in that situation in the first place.