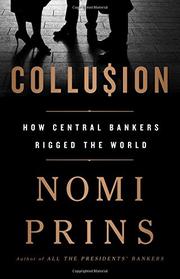 How Central Bankers Rigged the World

Wall Street executive Prins (All the Presidents’ Bankers: The Hidden Alliances that Drive American Power, 2014, etc.) delivers a sharp-edged critique of the hegemony of central banks over the world’s economies.

Central banks, supporting too-big-to-fail banking conglomerates, are skilled practitioners of what the author calls “money conjuring,” wherein “the cost of money is rendered abnormally cheap.” Through the trickle-downish machinery of quantitative easement, the very banks that brought on the financial crisis now remembered as the Great Recession reward themselves. In 2017, she notes, U.S. banks used 99 percent of their earnings to buy their own stocks and pay out dividends to their shareholders even as the easement was, at least in theory, supposed to loosen the purse strings and set more money loose in the broader economy. The closeness of central, government-allied banks with their private counterparts, including revolving-door jobs, has meant that regulators are all too willing to overlook excesses and violations; even in moments of financial turmoil brought on by the banks, the “conjurers” and the speculators are rarely blamed. The intervention of central banks in the marketplace, Prins adds, has mostly had the effect of distorting that marketplace by supporting a banking system that requires serious overhaul in the place of mere infusions of cheap money—and this money rarely finds its way into the hands of ordinary borrowers, and certainly not at the cheap rates the banks enjoy. Given that the central banks and those private counterparts have successfully resisted meaningful reform—witness the Trump administration’s efforts to scrap what little regulation there is—the likelihood of a repeat of 2008 seems high indeed. “It only takes one domino to fall to wipe them all out,” Prins warns in closing. “It will again begin with the banks, cripple the markets, and devastate the global economy.”

A somber, important warning that’s likely to cause readers to wonder about the safety of their assets, if not fear for the near-term future.