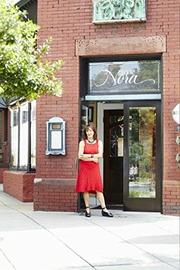 How a Pioneering Chef Helped Shape the Way We Eat Today

In a sparkling memoir, the founder of Restaurant Nora tells of making her own journey into the food world.

From her earliest days growing up in the Austrian Alps, Pouillon was exposed to simple, fresh food. When she came to the United States with her French husband in the 1960s, she was appalled by the drab produce and packaged, processed food found in American supermarkets. A book by British food and cooking writer Elizabeth David introduced her to the importance of fresh, seasonal and natural ingredients and essentially launched her on a new career path. Pouillon quickly learned to cook and then moved on from making dinners for friends to launching a catering business, teaching cooking classes in her kitchen, and becoming chef of a new restaurant, the Tabard Inn, in Washington, D.C. Spurred by the need to earn a living—she had left her husband—the author joined with two partners to open Restaurant Nora in 1979. Finding financing was one problem, and finding local, pesticide-free produce was another, but Pouillon met her challenges head-on. As a measure of her success, in 1999, Restaurant Nora became the first certified organic restaurant in the country; in 2010, it was chosen as the site of a surprise birthday party for Michelle Obama. Much more than a memoir of one woman’s career in food, the book also provides a picture of the growth of the organic food movement in the U.S.—a movement that Nora is still very much a part of. She organizes farmers markets, brings chefs and farmers together, works with consumer advocacy groups, and attends conferences at home and abroad. Pouillon’s story is also a feminist one, showing a woman with young children dealing with a failed marriage, working successfully in a male-dominated business and helping other women to succeed in it.