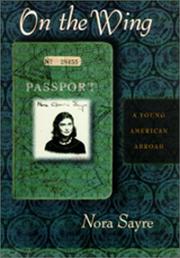 “Like millions of young Americans with knapsacks and bicycles,” she writes, Sayre headed to England at 22 to find what London might hold. There her resemblance to any typical American youth ends. The daughter of a New Yorker writer, she was soon taken up by her parents’ London friends (a cross-section of the period’s intelligentsia that few 22-year-olds could ever dream of meeting) and enjoyed a five-year stay in the company of history makers. Her first apartment came courtesy of Arthur Koestler, Tyrone Guthrie hired her to research scripts for his theater company, critic John Davenport helped her navigate the London literary scene, and A.J. Liebling became her dinner companion. In the wrong hands, such a tale could be insufferably smug; happily, Sayre is a charming raconteur with a light comic touch that comes into play when she recalls such incidents as Graham Greene, outraged by a savage review from Liebling, running in circles around her and a companion who had been seen with Liebling earlier in the evening. Interleaved with tales of stars—Katherine Hepburn grousing about a friend’s rusty garden tools, Ingrid Bergman’s musings on Casablanca’s two final scenes—is fine political history. An extended chapter on the blacklisted Hollywood community gives vivid insight to the motivations of the exiles and provides an excellent précis of what was happening in the artistic community back home, long before most Americans had a comprehensive view of the anticommunist battle. “All this history was new to me. . . . About twenty years passed before it was publicly discussed in my own country.” Sayre is not above the tasty details, however; she lards her entire narrative with descriptions of who wore what and how their houses were decorated.