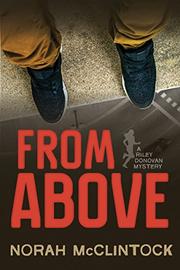 From the Riley Donovan Mystery series

Following Trial by Fire (2016), teen sleuth Riley Donovan has a murder mystery on her hands.

After school one day, the screams of cheerleaders draw Riley to the body of a fellow student, Ethan Crawford, dead after falling off of the roof of the rec center. The police—including Riley’s guardian, Aunt Ginny—are less than thrilled to see the young white gumshoe there, especially when she tells them of a figure she saw on the roof. That fact, along with other evidence, leads investigators to believe that the death wasn’t strictly accidental. Riley’s tied up in the investigation whether she likes it or not—in the weeks prior to his death, Ethan broke up with his girlfriend and sought out Riley’s company; beyond that, Riley’s friend (and possible eventual love interest) is keeping secrets. When Riley is assigned to assist the strict football coach (who has it out for Riley), she gains access to Ethan’s teammates and promptly takes advantage of it to interview them and find places where the official story doesn’t add up. The football aspect of the story is a bit weak—admittedly, Riley doesn’t know much about it, but the vague details of the team and player positions may confuse readers who do. The mystery, however, has plenty of suspects (most lacking racial detail) and a final surprise alliance.