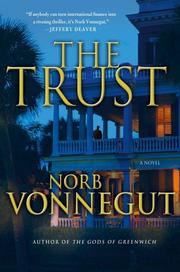 Mommas, don’t let your sons grow up to be Manhattan brokers or board members of charitable foundations. They’d never survive the combination of criminal plots and personal threats.

When Grove O’Rourke takes a call from Palmer Kincaid, his old mentor and his biggest client, he can tell that the old man is more than worried. But he doesn’t catch the next plane to Kincaid’s home in Charleston, S.C. As a result, he has to make the trip anyway for Palmer’s funeral after he’s killed in a convenient one-person boating accident. Smarting with guilt, Grove agrees to join Palmer’s daughter Claire, 33, and his second wife JoJo, 39, on the board of the Palmetto Foundation, which Palmer launched and headed. Another mistake. Katy Anders, Grove’s boss at Sachs, Kidder and Carnegie, is anything but supportive. And the very first item of business before the Foundation, a transfer of $65 million donated by the Catholic Fund to the Foundation for relief work in the Philippines, raises Grove’s hackles. He’s taken aback by dogged Fayetteville lawyer Biscuit Hughes’ revelation that the Catholic Fund owns Highly Intimate Pleasures, an adult novelty superstore, and he doesn’t trust Father Frederick Ricardo, the fast-talking Maryknoll priest who’s pressing for the transfer. Just to keep the pressure up, Grove learns that Morgan Stanley Dean Witter is poised to purchase his division at SKC and that Isabelle Torres of the FBI is dogging his every move and demanding he spill everything he knows about the Foundation. And that’s all before JoJo is kidnapped by someone demanding $200 million—virtually all the Foundation’s assets—for her safe return.

A fast and furious novel from Vonnegut (The Gods of Greenwich, 2011, etc.) and a guaranteed good time.