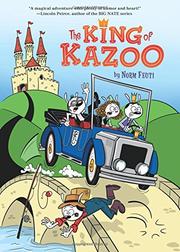 THE KING OF KAZOO

A king, his daughter, and their royal inventor set out on an epic quest to locate a mysterious tunnel in a faraway mountain.

King Cornelius, a rabbitlike, frivolous halfwit, can't figure out what his legacy will be to his subjects. He lives in his castle with his daughter, Bing, a talented magician who's often accompanied by her familiar, a bluebird named Gypsy. When Gypsy alerts Bing to a strange tunnel that appears suddenly at the top of Mount Kazoo, the father and daughter—along with the mute royal inventor, Torq—embark on a dangerous journey to unearth the truth. Along the way, their expedition is fraught with peril, including run-ins with armed amphibians, zombified villagers, and a vindictive alchemist. With his inflated ego, Cornelius may be his own worst adversary, and without the quick thinking of Bing and mechanical ingenuity of Torq, he would certainly fail. Feuti's steampunk-with-a-medieval-twist worldbuilding is both exciting and imaginative without being jarring or anachronistic. The dynamics between hapless Cornelius and the clever-yet-often-overlooked Bing are exceptionally well-wrought and offer an artful feminist message. The clean lines and character stylizations are reminiscent of Jeff Smith’s Bone series and will certainly appeal to a similar audience. Though this volume provides closure, expect an outcry for more adventures in this intriguing world.