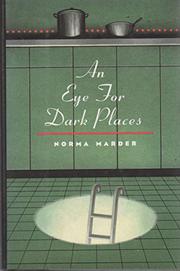 AN EYE FOR DARK PLACES

A fantastic reality beyond the bleak one offered a lonely woman—at the end of her tether in a fragmented future England- -serves as the wellspring of hope in this ambitious, original debut from Illinois-based Marder. Locked in a loveless marriage, Sephony sees hands everywhere: scuttling across floors, clawing up the furniture, and dancing duets in the most unlikely places. Neither her practical husband nor her self-absorbed children see what she sees or understand what she feels, so when a hole appears in the pantry floor and a mysterious stranger carrying two chickens beckons her to descend a ladder after him into it, she puts on her coat and follows. Her guide, Claro, takes her through a wondrous terra incognita full of strange sights and creatures, eventually bringing her to the treehouse where he lives with his family. Although she's fallen in love with him, she is soon forced to return to her own domain, coming through another hole into a jungle in the midst of what used to be Regent's Park in London. With her homecoming strained by her refusal to tell either the family or the police where she went, Sephony increases the distance from the life she had by renewing a long-lapsed acquaintance with Aaron, her first love. She also turns her back on her privileged kind by caring for the Dulls—an entire class of behaviorally conditioned laborers living a subhuman existence in warrens in the city—and finally leaves her husband in order to be with Aaron—regaining the love of her rebellious daughter in the process. Painfully overextended and sketchy at times, but, still, an imaginative first effort from a distinctive voice that deserves to be heard again.