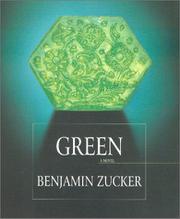 The brilliant minds of today and yesteryear crowd into the exquisitely designed pages of this odd folly of an art novel.

Seeing no reason to leave well enough alone, globetrotting Ivy League jeweler Zucker continues the fictional experiment he first assayed in the much-ballyhooed Blue (2000). Here, Green has a character of sorts in the figure of Abraham Talcott, a gem merchant in Greenwich Village who leads a dismally uninteresting life. Fortunately, Zucker is using Tal only as the most slender of threads upon which to hang his obsessive themes. For this is no ordinary story. Tal’s occupies only a small portion of each right-hand page. The remainder is taken up by commentaries and quotations that, at first blush, seem to have only the most tangential relationship with Tal’s story. Additionally, every left-hand page in this coffeetable-sized volume is entirely taken up by a reproduction of a painting, photograph, or design. The structure of Green is intentionally Talmudic, though many of its themes are far more secular. Meantime, the cast of characters Zucker calls upon for his commentaries and imagery is a pleasing one: F. Scott Fitzgerald, Cézanne, Lawrence Ferlinghetti, Black Elk, lots and lots of Bob Dylan, and a host of rabbis and religious scholars. Any attempt at a straight reading is quickly rebuffed, for the story of Tal, his acquaintances and musings, is almost aggressively noninvolving. As a result, the reader’s eye turns to the pictures—lush imagery from Vermeer, Pollock, and Blake—and all those commentaries crowding each page. The babble of voices is obviously meant to be taken from multiple directions, like the facets of a gem. But why? What is the reader supposed to get out of this experience besides a desire to listen to Bob Dylan and maybe read up on their Fitzgerald?

Multiple readings could perhaps yield more insight—not an onerous task since this is one of the more beautiful books in recent memory—but it’s difficult to regard Green as anything more than a curio.