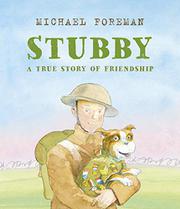 This true story of a stray dog that became a decorated war hero was first published in England to commemorate the 100th anniversary of the armistice that ended World War I.

The smell of cooking attracts many stray dogs to the soldiers’ training camp, but one particular dog finds one particular soldier, and the two become inseparable. “An odd little dog with a flat face and short legs,” he is dubbed Stubby. Endearingly portrayed with big eyes and a let’s-play expression, Stubby goes off to Europe with his new soldier friend, the unnamed narrator of the story. Stubby marches, holes up in trenches, becomes a guard dog, wears a gas mask, and is injured on the battlefield. Stubby goes home a hero and leads the great victory parade, wagging his hero’s tail in this hero’s tale. Though he has created a darling of a canine protagonist, Foreman doesn’t shy away from the realities of war, vividly depicting villages in ruins, bullets “zipping and whistling around,” injured soldiers, and Stubby himself “covered in mud and blood, his eyes full of pain.” Except for an occasional face in a cheering crowd, all characters are white. While Foreman makes the tale universal, the backmatter fills in specific details: The soldier’s name was Robert Conroy, the training camp was in Connecticut, and the fighting was in France.

A CHILD'S GARDEN OF VERSES
by Robert Louis Stevenson
Children

NOT BAD FOR A BAD LAD
by Michael Morpurgo
Children

THE TORTOISE AND THE SOLDIER
by Michael Foreman
Children

THE SEEDS OF FRIENDSHIP
by Michael Foreman