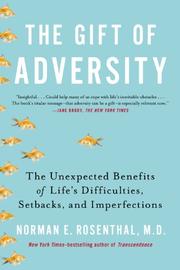 THE GIFT OF ADVERSITY

The Unexpected Benefits of Life's Difficulties, Setbacks, and Imperfections

A psychiatrist takes instances from his own life to illustrate how “setbacks, reversals, and imperfections” can lead to unexpected insights.

Rosenthal (Psychiatry/Georgetown Medical School; Transcendence: Healing and Transformation Through Transcendental Meditation, 2011, etc.) is best known for having defined “the syndrome of seasonal affective disorder,” a winter depression caused by diminished daylight, and pioneering the use of artificial bright light to ameliorate its effect. While working at the National Institutes of Health, the author led a project that correlated its incidence with latitude and time of year, establishing that “SAD works via the eyes, not the skin.” He and his wife had both been afflicted, and he describes the “sense of foreboding” he experienced when daylight savings time ended. Later in his career, he became an advocate of St. John's wort and Botox as treatments for depression. After 20 fruitful years at NIH, Rosenthal was the victim of a political shift there and was forced to resign. This led him to contemplate the pain of loss and the need to “reclaim a feeling of control” (which in his case meant becoming a writer) and to take up Transcendental Meditation. The author weaves together stories taken from his career and relates them to his earlier life growing up as a member of the South African Jewish community during the time of apartheid. He writes of a meeting with Austrian psychiatrist Viktor Frankl and his great admiration for Nelson Mandela.

Rosenthal makes a convincing connection between lessons learned from his personal experiences and contemplation of the lives of heroic figures.