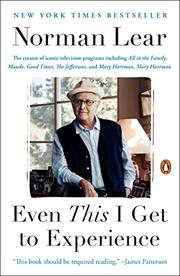 EVEN THIS I GET TO EXPERIENCE

A TV titan on his memorable life and storied career.

Lear, best known as the creative mind behind such classic comedies as All in the Family, Maude, The Jeffersons and Good Times, recounts his extraordinarily eventful life with his signature wit and irreverence. The result is not just a vividly observed and evocative portrait of a long life, but also a fascinating backstage look at the evolution of the American entertainment industry. Born to a charismatic and wildly unreliable con man—Lear’s father would miss a chunk of his son’s childhood serving a jail term for fraud—and an unaffectionate, self-obsessed mother, Lear flailed about in various unsuccessful ventures before teaming with friend Ed Simmons to write comedy, eventually penning sketches for the likes of Jack Haley, Martha Raye, Dean Martin and Jerry Lewis in the early heyday of television. After a stint as a film director and producer, Lear returned to TV to create the epochal series All in the Family, which famously brought sensitive political and social issues to the family hour. Lear’s other shows struck a similarly confrontational chord, explicitly discussing race, class, abortion and a host of other controversial topics. Lear’s analysis of network politics is astute and amusingly cynical, and his sketches of such legendary figures as Milton Berle are unsparing in their honesty. It’s not all showbiz; Lear writes movingly of his service in World War II, his difficult upbringing and subsequent troubled marriages, and his commitment to liberal causes, evidenced by his founding of the advocacy organization People for the American Way and his purchase of an original copy of the Declaration of Independence. That he makes these subjects as engrossing and entertaining as his Hollywood reminiscences speaks to Lear’s mastery of storytelling and humor.