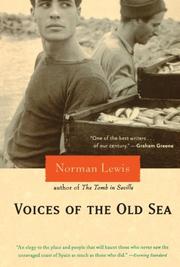 VOICES OF THE OLD SEA

A vivid, quirky, tragicomic tale of how progress ruined--or did it?--a sleepy corner of Spain. Lewis first came to the tiny Catalonian fishing village of Farol after WW II, looking for (and finding) a beautiful, peaceful, untouched world. He also found, by modern standards, a very crazy place. The fishermen were intensely superstitious: they never allowed leather objects in their boats, they never went to church for fear of ruining their luck, and if they accidentally encountered the parish priest they would quickly touch the nearest piece of iron or their testicles. They carried on an endless quixotic feud with the nearby farming village of Sort, which was as infested with dogs as Farol was with cats. (A favorite ploy was to fry dried sea-sponges in olive oil and leave them out for bait: the dogs that ate them would die of ruptured stomachs; any dog that didn't might be caught, castrated, and sent back to Sort with a black ribbon--for cowardice--around its neck.) The people were so poor that in the off-season they spent months in bed to save their energy and prevent hunger pangs. Since extra mouths couldn't be fed and contraceptives couldn't be had, husbands and wives slept apart and sex was strictly rationed. Enter Jaime Muga, a grasping, mafioso-like entrepreneur, who buys out Farol bit by bit, and prostitutes it to the tourist industry. The bare, rugged village is turned into a tacky, ""picturesque"" resort, invaded by vulgar foreigners; and the old traditions die. Lewis chronicles this process with pungent wit and immense sympathy; but was the transformation all that bad? The fishermen have exchanged their old culture (dry, dull, authentic) for the banalities of European capitalism--but they're eating better. One old patriarch perhaps says it best: ""The people hereabouts have always been cruel, mean and litigious, but they were never corrupt until those they looked to for an example set them one."" Whatever the moral, the story itself is as bracing and colorful as a walk on the Farol beach used to be.