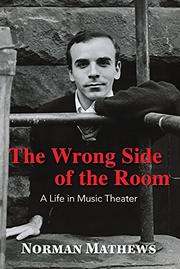 THE WRONG SIDE OF THE ROOM

A Life in Music Theater

Mathews was born to Catholic parents in Rockford, Illinois, in 1942, and he was named Ignatius Norman Cancelose, much to his chagrin; he’d change it later on. Mathews shares stories (which obviously tickle him) of his relatives’ amusement at his “incessant singing and dancing”; he enrolled in dancing school at age 4. He also had a distinct affinity for music and movies, which he would be exposed to during family day trips to Chicago. His accounts of his school experiences encompass all the insecurities and foibles inherent in the awkward adolescence of an unathletic but musically inclined young man. His burgeoning same-sex attraction directly challenged the teachings of his Catholic education, however, and the words of a local monsignor on the subject (“may God have mercy on your evil soul”) were psychologically damaging. However, Mathews followed his heart and focused his mind on two things: his theatrical aspirations and other young men. The wide variety of musical theater offerings in New York City in the late 1950s enchanted him further, and high school and college fortified Mathews with drama classes and ballet training, which further solidified his interest in the performing arts. He went on to land an editing position at Ballroom Dance Magazine, and from his mid-20s, his career in dance performance and musical theater began an incremental ascent. It would eventually include theatrical scores, playwriting ventures, and award-winning collaborations. However, a suicide attempt, insecurities about his sexuality, and health and career setbacks in the 1980s provided stumbling blocks along the way. The author, now 76, clearly delights in detailing his life story, starting with his Sicilian ancestry and his grandparents, who arrived in America via Ellis Island. He goes on to present his distinguished life on Broadway with all the glow of center stage and the nerve-wracking thrill of opening night. Overall, he delivers an alluring autobiography of a man “who wore enough hats to fill a millinery shop” thanks to a highly varied career that included editing, dancing, and musical composition. However, its verbosity does work against it at times; the author piles on expository details, particularly in the first half, which sometimes results in a sluggish pace. Still, many readers—and fans of classic Broadway musical theater, in particular—may find that they don’t mind the author’s long-windedness in the earlier sections, as they’ll gleefully discover that the book’s second half is fully stocked with accounts of stage shows galore—not to mention impressive name-dropping (Barbra Streisand, Betty Grable, Dorothy Lamour, Gene Kelly). These anecdotes from the theater’s social scene glide alongside vivid imagery from the author’s performances and other successes. The book also has a delightful, chatty sense of humor with moments of wry wit that make it exciting to read. In the end, it effectively celebrates a life of artistic inspiration alongside the giddiness and glory of live theater.