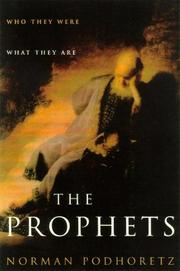 Who They Were, What They Are

Influential critic (editor of Commentary for 30 years), neoconservative figurehead, and one-time Hebrew scholar revisits the “poetry” of the biblical prophets.

In addressing nonbelievers as well as Christians and Jews, Podhoretz (My Love Affair with America, 2000, etc.) chooses to quote primarily from the King James Version (1611) of the Old Testament because of its approximation of both the meter and meaning of the Hebrew Bible, itself an original amalgam of Semitic and Greek texts. “I am not a very good Jew,” the author acknowledges, “as measured by the very limited extent to which I observe the Commandments of Judaism; nor do I think that the world was created about 6,000 years ago in only six days.” Nonetheless, he finds the growing body of scientific evidence that undermines the Bible’s historicity an irksome impediment to be brushed aside, hoping almost wistfully that future discoveries might reverse this erosion. His passion and reverence, however, for the actual (in his view) personages and prophetic literature that inhabit the roughly half-millennium accounted for in the first five books (The Pentateuch) of the Bible are undiminished. His interpretations and commentaries, replete with references to the significant minutiae of recent scholarship, rabbinical doctrines, and linguistic subtleties, comprise an extraordinary intellectual exercise. For example: in Abraham’s near sacrifice of his son Isaac at God’s command, Podhoretz finds not merely a test of faith but the “first shot fired” against idolatry. This refrain builds to a crescendo as the political Podhoretz finally elbows the literati offstage and delivers a polemic on creeping anomy in American culture that—and he means it—invites God’s judgment against us. America’s idolatry is worship of the self, the author concludes, condemning liberal utopianism, feminism (for—by implication—contributing to higher teen suicide rates), and even the environmental movement (for repudiating God’s placement, in Genesis, of man above the animals).