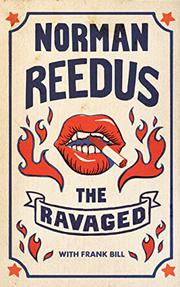 by Norman Reedus with Frank Bill

This debut novel from Walking Dead actor Reedus follows three thematically connected yet narratively unrelated people as they journey to find themselves.

Hunter, a heavily tatted Iraq War vet and self-proclaimed gearhead, attacks his boss at the bike shop after catching him kicking a dog. “Hunter was old school,” the narrator says, rough-hewn but with strong moral fiber and a heart of gold. After learning his father died in a “mysterious house fire” in California, Hunter hops on his Buell S1 motorcycle alongside his buddies Nugget and Itch for a cross-country haul to execute the will. Meanwhile, a wealthy 65-year-old executive named Jack is mugged while traveling aimlessly through South America, neither the first nor the last of his hardships. Jack abandoned his cushy, bloodless office lifestyle after his dying mother told him to “run and never look back,” words he continuously labors to unpack. Finally, Anne, an abused teenage girl in Tennessee, steals her father’s savings and .38 revolver and runs away from home, clobbering her brother upside the head with a cast-iron skillet when he tries to stop her. She connects with her friend Trot, and they join a community of train-hoppers. Co-written by Bill, the story reads like a pastiche of Robert Pirsig’s Zen and the Art of Motorcycle Maintenance and Jack Kerouac’s On the Road, the latter of which is name-dropped as “great” by multiple characters. Though occasionally hitting some beautiful imagery of the American heartland, Reedus falls victim to implausible dialogue—“Fabiola, you are reading me like a stock report,” Jack says—and overcooked language: “flesh the color of a high-dollar medium-roast coffee bean.” Frequently wordy summaries do little to develop the thinly sketched characters; we know nearly as much about them on Page 25 as on Page 250.

A curious fetishization of outsiders, outlaws, and the down-and-out.