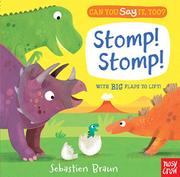 From the Can You Say It, Too? series

Bright colors and dramatic scenes will attract young dinosaur lovers to this board book with shaped, oversized flaps that hide five popular dinosaurs.

The predictable format lends itself to use with young toddlers. An unnamed dinosaur on the left side of each spread asks a question. When a large flap on the facing page is turned, an extinct creature—there are five in all—is revealed. A sound or behavior one might imagine could be characteristic of that animal is repeated in a larger font. A “happy triceratops” stomps; a “giant diplodocus” munches; a “sleepy stegosaurus” snores; a “flying pterodactyl” squawks; a “mighty Tyrannosaurus rex” (and hatchlings) roars. (Only “Tyrannosaurus” is captitalized, presumably as its moniker includes the full Latin name.) Curiously, the triceratops is described as “happy” with no evidence of that emotion beyond a slight, anthropomorphized smile. If it is happy, why is it stomping? Clever toddlers will quickly learn that the flap in the slightly raised frame on the right-hand page is almost always hinged at the bottom. A second flap opens to the side on the T. rex spread to reveal three baby tyrannosauruses in their eggshells. However, this one is quite difficult to manipulate and easily torn.

Dinosaur fans will happily engage, but true budding paleontologists will quickly grow out of it