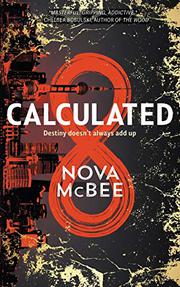 A high-stakes YA tale of betrayal, revenge, and numbers.

“Josephine. Octavia. Double 8. Mila. Phoenix.” Josephine Rivers had so many names in the last two years that she barely knows who she is anymore. She’s a calculating prodigy with the uncanny ability to look at the world through a purely mathematical lens. After a betrayal by her own family when she’s only 15, she’s kidnapped and taken to China by the sinister Maxima, known as “Madame,” who forces her to use her gift to increase her fortune. This marks the beginning of the protagonist’s arduous tale, which sees her moved around Shanghai’s criminal underground as others exploit her gift. Her only close company is older captive Hong Rui, nicknamed “Red,” whose wisdom and support change how she views her own power and teaches her what she needs to survive. Now she’s 17 and working for a wealthy man whose captivating son Kai starts to chip away at her emotional defenses. She has the fate of the world in her hands, thanks to her unique gifts, but she also craves vengeance against those who’ve wronged her. Can she save the world from a financial collapse and also bring her enemies down? And can she trust Kai enough to let him into her heart? This engaging take on The Count of Monte Cristo, the first in a planned series, is set primarily in Shanghai in the present day but bounces back and forth in time to show Josephine’s long journey toward freedom. Along the way, debut author McBee effectively shows how she goes from being an unwilling pawn to an empowered queen. Jo’s unique way of understanding and interacting with the world informs much of the narrative, and readers will find it compelling yet also easy to visualize. Recurring themes include the opposing forces of revenge and justice, trust and betrayal, hate and love—all of which underscore Jo’s character arc. There’s a general sense of closure in the main storyline, but open questions, and a small cliffhanger, promise more to come.

An enjoyable thriller with an intriguing, relatable protagonist.