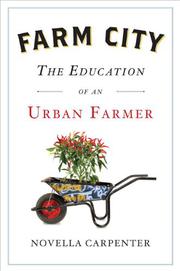 The Education of an Urban Farmer

Urban eccentricity meets rural thrift and tradition in a charming debut memoir about the author’s farm in downtown Oakland.

Carpenter, the progeny of two hippies whose attempt to go “back to the land” ended in near disaster, was drawn to farming yet unwilling to give up the cultural and intellectual perks of an urban environment: museums, bars, libraries, etc. Already an amateur apiarist and avid gardener, she moved with her husband from the Seattle suburbs to “Ghost Town” Oakland, attracted by its energy and diversity, undeterred by the nightly drive-bys. Of equal interest to the author was the garbage-filled abandoned lot next door. Soon, her visions of heirloom tomatoes, peach trees, fresh squash, even watermelons, became a reality. Inspired, she added a few chickens, then some ducks, geese, two turkeys, a few rabbits and two pigs. Carpenter found herself increasingly enveloped in the beautiful yet brutal circle of life that rules a farm. She gives heart-rending descriptions of her emotions when stray dogs killed one of the turkeys, but also admits that she intended to harvest the remaining bird for Thanksgiving dinner. In warm, witty prose, she describes feeding her livestock with scraps foraged from neighboring restaurants, as well as visits from local children, Vietnamese monks and eccentric neighbors, many of whom joined the author for meals and enjoyed the fruits of her labors. The special relationship between farmer and food was driven home for Carpenter when a local chef taught her traditional rural Italian techniques for harvesting every part of her pigs to create delicacies from headcheese and pork broth to prosciutto and salami. Experiencing Carpenter’s trials and tribulations, readers will get an honest portrait of where meals come from and an understanding that connecting with the food chain, even in the smallest ways, can enrich the palate and the soul.

A fascinating, vividly written story about city and community that will change perceptions about the local farmers market.