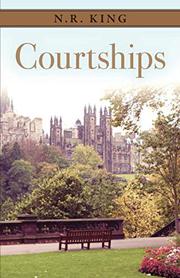 The Kaminskys fled Russia before the pogroms. Trying to make their way to America, they ran out of money and made their home in Edinburgh, hoping that it was far enough away from the rising anti-Semitism sweeping Russia and Europe. In Scotland, they opened a shop to sell fine ribbons, buttons, and gloves. Now, in 1932, Bess Kaminsky is doing her best to raise her daughters, the younger Addy and the elder Rose, since her husband, Joseph, died. The family takes in a boarder—an American medical student at the local university—to help make ends meet. As Bess frets over troubling radio reports coming out of Europe, her two daughters are distracted by the quiet student living under the same roof as them. The novel is told from the daughters’ third-person perspectives and details their tribulations as they search for husbands and happiness as a world war approaches. It’s divided into two parts, with Addy largely disappearing from the second half, shifting readers’ attention to Rose; this choice will likely disappoint those who’ve grown to like the spunky younger sister. The novel as a whole showcases King’s impeccable research, which is particularly evident in the string of contemporary novels that Rose voraciously reads and the captivating details about daily life in mid-20th-century Edinburgh. The story, which takes place from 1932 to 1947, includes a poignant, if heartbreaking, subplot about a soldier who returns from combat with extreme PTSD. King also persuasively captures Addy’s and Rose’s inner lives when they’re teenagers; it’s a heady time for the characters, and the author shows notable skill in bringing it to life.

A rich family drama that clearly captures the complicated relationship between two siblings.

WE WERE THE LUCKY ONES
by Georgia Hunter
Fiction