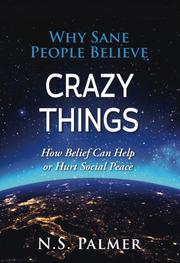 How Belief Can Help or Hurt Social Peace

A philosophical analysis examines the nature of belief and the sources of contentious disagreement.

Everyone seems to agree that contemporary society is plagued by a hostile divisiveness, political and cultural. Debut author Palmer argues that these intellectual cleavages are the result of deep misunderstandings about what it means to believe. Rather than private mental events, the author interprets belief largely from the perspective of public action, prioritizing behavior over purely intellectual commitment. In addition, he understands belief as a complex skein of motivating purposes—one believes something not only as an assertion of fact, but also as a display of solidarity or loyalty, as a means of psychological reassurance, or as a way to make sense of a morally ambiguous world. Highly intelligent people can become powerfully committed to positions that are both unclear and inadequately supported by evidence because in some sense that outlook is useful, performing a practical function that transcends the mere description of the world. Palmer expertly surveys the historical development of belief, furnishing a philosophical tour that pays close attention to religion. The author’s anatomy of religious commitment is one of the highlights of his impressively nuanced analysis—while in some sense, theological statements are so unempirical they seem meaningless, he contends such metaphysical leaps are a natural response to the human experience of the ineffable, and the longing for transcendence. Palmer also ably describes the neuroscience that undergirds belief formation, and the backdrop of humans’ evolutionary maturation. The author’s prose is surprisingly accessible given the abstractions he aims to clarify, and he navigates turbid academic waters with informality and light-handed grace. In addition, there isn’t a whiff of partisan ax-grinding to be found—this is an epistemological examination of intellectual conflict, not an expression of political loyalty. But while Palmer’s ultimate defense of tolerance as a virtue is rigorous, some of the solutions he offers seem incongruously simplistic. For example, can “alternate visual cues” like badges or uniforms distract people from more divisive ones like race? The author’s argument simply doesn’t make such a peculiar suggestion even intriguing, let alone plausible.