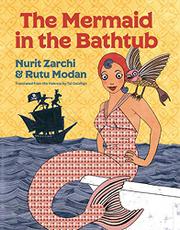 THE MERMAID IN THE BATHTUB

Greatly concerned with his neighbors’ opinions, blank-faced Mr. Whatwilltheysay wants the mermaid to leave, but only when no one can see her. Although he is attracted to her, he cannot imagine marrying her, her bottom half consisting of a fish tail—he is true to his rather obvious name. She rightly calls him out on his fish-shaming: “You’re saying that because you have legs.” She keeps trying to introduce her watery ways into his humdrum life, but he’s not falling for her the way that males usually do in mermaid tales. When she disappears, he realizes his mistake. He madly searches the Tel Aviv waterfront and, on the fourth night, finally spots her, rising majestically from the waves, in the bathtub she stole from his apartment. The old stories do ring true, but after the fearful guy joins her, Grain-of-Sand has the last word: “I saved the tub stopper for you, my darling.” The two main characters present white. Inspired by mermaid legends, this Israeli import has a wry humor that may mystify young readers here. The surrealist illustrations feature intense colors on very shiny paper; they will draw everyone’s attention, children and adults alike.

Absurdist and realistic at the same time, this Israeli mermaid tale requires a dry sense of humor.