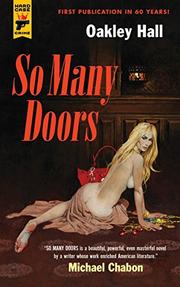 A willful and provocative beauty drives every man within her orbit to distraction, and one to murder, in a novel that was first published to great acclaim in 1950.

Each of the tale’s five sections focuses on a different character, all of them with hard-luck stories. The first begins as a broken Jack Ward sits in jail. Having confessed to the murder of an unnamed woman, he tells his court-appointed lawyer that all he wants is the gas chamber. Next Hall (Warlock, 1958, etc.) flashes back to Depression-era southern California, where Baird, a distressed rancher, is trying to keep his gorgeous and unruly teenage daughter, Vassilia, from running wild. Denton, a wealthy neighboring rancher, garners her affection by buying V a beautiful horse. When he offers to pay for V’s college education, claiming that he loves her like a daughter, Baird is unwilling to deny his generosity. The next section focuses on Ben Proctor, a small-time politico and roommate of Jack Ward, who’s dating V. Despite himself, Ben finds himself undeniably drawn to V, something Jack seems frustratingly oblivious to, often inviting him to join them. Whether her flirtatiousness is a form of friendly attention or something more, this arrangement can’t end well. Then the story jumps to Marian Huber, who adds another angle through her husband Arch’s friendship with Jack Ward, who’s newly married to naïve Gene Geary. Marian doesn’t think that supersweet Gene is a good match for erratic Jack, but when she spots him with a voluptuous temptress, she feels duty-bound to inform the innocent newlywed.

LOVE AND WAR IN CALIFORNIA
by Oakley Hall
Fiction

AMBROSE BIERCE AND THE ACE OF SHOOTS
by Oakley Hall
Fiction

AMBROSE BIERCE AND THE TREY OF PEARLS
by Oakley Hall
Fiction

AMBROSE BIERCE AND THE ONE-EYED JACKS
by Oakley Hall
Fiction

AMBROSE BIERCE AND THE DEATH OF KINGS
by Oakley Hall
Fiction

AMBROSE BIERCE AND THE QUEEN OF SPADES
by Oakley Hall

SO NUDE, SO DEAD
by Ed McBain
Mystery