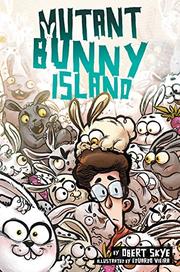 There’s a long, proud history of nonsense books, which includes Lewis Carroll and Dr. Seuss. But this novel makes less sense than most.

When Perry goes on vacation to Bunny Island, he packs nothing but junk food. He leaves on the spur of the moment because his uncle has mailed him a two-word distress call. The first word is “HELP.” The second word is “MEL,” and Perry interprets it to mean that his uncle has been kidnapped by intelligent newts. This actually makes sense. Perry and his uncle are fans of a comic book about Adm. Uli, a talking squid, and in the squid language, “mel” means newt. But even people who don’t read comics seem to think Perry’s behavior is normal. His father has no problem sending him across the world by himself, with no notice whatsoever. Juliet Jordan, a girl he meets on the island, does think his story is odd, but it doesn’t bother her much. “Sometimes,” she says, “life is better when you stop trying to make sense.” (Most of the characters are white, though one supporting character is described as “dark-skinned and cool looking.”) The book would have benefited from a few more skeptics. After all, Alice questioned everything she saw in Wonderland.

The story is always fast-paced and imaginative, but maybe it’s a little too imaginative. Skeptics may prefer something a bit more grounded