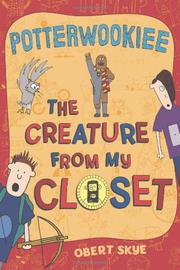 From the Creature from My Closet series, volume 2

Having reintroduced his family (“I mean my mom calls me Ribert, and if she’s not humiliating me, she’s sleeping”), Robert explains the origins of the pocket companion he dubs “Hairy.” He chattily goes on to record efforts to save his little buddy from rough friends, his little brother, a garbage truck and an aggressive owl, along with his repeated transformation into a dork whenever he runs into dreamboat neighbor Janae. Amid references to monkey waste, a modified version of Old Maid called “Yo Mama” and other strained laffs, he recruits said friends to reform a bully by tying the punk to a graveyard tree one night. He also creates what turns out to be a revolting concoction for a cooking contest in hopes of appearing on Average Chef, “TV’s third most watched reality cooking show.” Still sailing along in Jeff Kinney’s wake format-wise, Skye presents Rob’s tally of haps and mishaps in a mix of block print and frequent, wobbly line drawings with punch lines and side remarks in dialogue balloons. In the end, Hairy leaves his tiny wand as a keepsake and returns to the closet, setting the stage for Rob’s next visitor: Pinocula.

Maybe the next episode will be less derivative. There’s always hope.