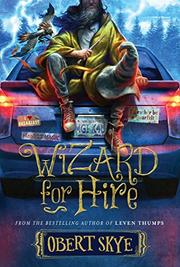 After his parents are abducted from their secluded forest home, a young boy survives alone on canned goods and the stories he finds in books.

Ozzy, now 14, has learned science and psychology from his parents’ texts as well as magic and wonder from Rowling and Tolkien. When the solitary white boy discovers Clark, his father’s solar-powered mechanical bird, Ozzy finds the courage to explore his surroundings. There Ozzy discovers Sigi, a beautiful girl whose light brown skin he finds “more interesting than the entire sea”; high school hot lunches; and Rin, a white wizard for hire. Clark encourages Ozzy to work on his appearance as well as his social skills. With a new haircut, a fresh wardrobe, and the possibility of magic at his disposal, Ozzy decides to find his parents. But amid a whirl of car chases, pork-filled omelets, and new friendships, Ozzy worries that no amount of magic will bring his parents back. Skye pens a clever coming-of-age tale filled with possible magic, definite mystery, and a hearty helping of humor. Ozzy’s wide-eyed optimism is heightened by Clark’s wry wit and Rin’s ridiculous worldview, but his boundless spirit and willingness to take risks are what will keep the pages turning. While the reveal of the mystery is disappointing, it does little to diminish this story.

A stand-alone standout for fans of Leven Thumps.