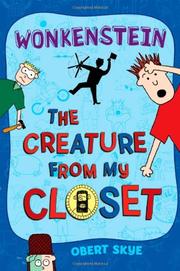 From the Creature from My Closet series, volume 1

Skye adds another Wimpy Kid to the growing bandwagon.

Sounding almost too nerdy to be true ("I'm kind of like a backup singer in the song of life"), 12-year-old Rob relates his tale in the now-requisite mix of block-print–type prose and line-drawn cartoon figures with punch lines or commentary in dialogue balloons. A string of hectic events follows the appearance of a manic mannequin from the midden of books and old science projects in his closet. He describes it as "a small, weird man who came up to just above my waist. He looked like two different people who had been smashed together." Comical chases, pranks, interactions with friends dependable and otherwise, mortifying mishaps in front of girls and like standard fare later, Rob has overcome severe stage fright to mend fences with classmate Janae and others by reciting a poem of apology at a school talent show. He has also been turned on to books by his discovery that the mannequin is an amalgam of Willy Wonka and Frankenstein's monster. In the end, Wonkenstein slips back into the closet—and out springs an even smaller Harry Potter/Chewbacca blend. Sequels, anyone?

Likely to be lost in the crowd, but comfy antics for readers who don't probably much like reading—which, one thinks, is exactly the point. (Fantasy. 9-11)