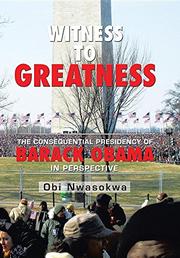 The Consequential Presidency of Barack Obama in Perspective

A self-described admirer of President Barack Obama makes the case for his greatness.

Whatever judgment one ultimately makes of Obama’s presidency, it is certainly one of historical significance, not the least because he’s the first African-American to occupy the Oval Office. Debut author Nwasokwa argues, as the book’s title suggests, that Obama can already be judged a great president on meritocratic grounds as well. Nwasokwa presents a detailed history of Obama’s rising political fortunes, beginning with his emergence into the spotlight at the Democratic National Convention in 2004. Shortly after, despite his own admittedly brief resume in Washington, D.C., Obama ran for the highest office in the land. The author gives a remarkably granular account of his subject’s implausible electoral success, surely an underdog against a powerfully entrenched establishment candidate, including a provocative discussion of the controversy involving Obama’s spiritual mentor, the Rev. Jeremiah Wright. Nwasokwa’s treatment then largely revolves around what he considers to be the major achievements of Obama’s tenure, focusing on his economic stimulus programs and the passage of health care reform legislation. The author liberally sprinkles in autobiographical asides in the book, sometimes discussing his own experiences as an African-American in the United States. These are some of the finest sections of this volume, and Nwasokwa thoughtfully considers the historical contradictions that beset the United States, a country of great opportunity and generosity but also persistent racism and social inequity. The prose often lacks discipline, providing pagelong paragraphs overloaded with information that too often tax the reader. But the principal failing of the study is that the author’s fawning adoration makes it impossible for him to capture the complexity of Obama’s often controversial presidency. Nwasokwa glosses over the criticisms of the president’s major policy achievements, even those forwarded from the political left. For example, despite nuanced debates even within Obama’s own party regarding his stewardship of the economy from the recession, the author concludes that all of the president’s reforms “succeeded beyond expectation.” While there’s nothing inherently wrong with wanting to “savor and honor” Obama’s leadership, such adoration renders both objectivity and the appreciation of dissent impossible.

A book that offers a worthwhile reflection on racial relations in America but a hagiographic interpretation of Obama’s presidency.