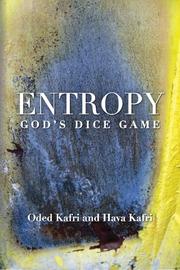 A remarkably complex yet fascinating scientific exploration that illuminates a particularly thorny area of physics for laypersons and professionals alike.

What is entropy? It’s a measure of uncertainty, but how is it defined in nature? How does it relate to other things like corporate communications and social networking? These are all questions that some of the most brilliant minds of the 19th and 20th centuries have pondered. Whether or not readers who don’t wear lab coats will comprehend this latest foray into the inner workings of the physical world depends largely on a reader’s determination and ability to wade through hieroglyphic formulas that extend far beyond freshman physics. This isn’t StarTalk Live or even Cosmos, but rather an ambitious textbook that seeks to appeal to learned scientists without leaving the rest of us numskulls behind. Gently paced discussions about “symmetrical” and “asymmetrical” networks having profound implications for achievable concepts in air travel and online communication perhaps come closest to hitting the mark. Generous bios of entropy’s greatest thinkers, meanwhile, add a much-needed human element to the proceedings. Nevertheless, even overviews of such giants in the field as James Clerk Maxwell and Claud Elwood Shannon come dangerously close to becoming dry resumes rather than engaging biographies. Take, for instance, this crisply written revelation: “Today, Shannon’s insight is part of the design of virtually all storage systems that digitally process and transfer information from flash memories on through computer and telephone communication, to space vehicles.” Although a few of these intriguing biographical bits might appeal to a wider audience, readers searching for a deeper exploration of “black body radiation” and the Second Law of Thermodynamics might consider Ludwig Boltzmann’s personal struggles an intrusion.

An earnest examination that walks the tightrope between the scientific community and casual readers.