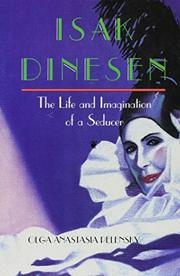 ISAK DINESEN: The Life and Imagination of a Seducer

Although colorful and informed, this anecdotal biography pales before the original ""self-creation"" of Karen (Tanne) Blixen, the Danish writer and adventuress herself who told her stoW better in Out of Africa. After an ""enchanted"" childhood, dominated by an overbearing grandmother and a syphilitic father who committed suicide, Dinesen escaped to East Africa to marry her cousin, acquiring a title (baroness), a case of syphilis, a coffee plantation, and a black servant, Farah, whose native wisdom sustained her through her divorce and an affair with Denys Finch Hatten, English free-spirit and hunter who was later killed in a plane crash. Returning home, Dinesen became a writer, popular in America, where such works as Seven Gothic Tales, written in stilted literary English, were Book-of-the-Month Club selections. In Denmark, she became the center of a cult, the Heretics, young male writers and artists bewitched by what they believed were her psychic powers, her demanding and demonic nature, her sinister masquerades. With eating habits reminiscent of Kafka's ""Hunger Artist,"" she died of starvation in 1962. With hordes of new papers, interviews, and tours taken in Dinesen's footsteps, along with 12 ""new themes"" to explain her subject, Pelensky (English/Boston Univ.) claims many advantages over Judith Thurman (Isak Dinesen, 1982), biographer, and Robert Langbaum, critic--but she fails to produce a coherent story, to interpret the writings, to deal with such genuine problems as Dinesen's sexuality or her pro-Third Reich political sympathies. In spite of more foreground and background, then, here Dinesen remains an elusive shadow in her own life.