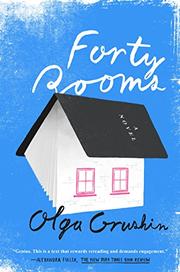 The award-winning author of The Dream Life of Sukhanov (2006) and The Line (2010) contemplates the tension between art and domesticity.

A little girl walks into a bedroom to find a mermaid sorting through her mother’s jewelry. The mermaid knows the story of every bauble: these earrings were a gift from the czar’s uncle to the girl’s great-grandmother, a ballerina; that uncut emerald was prised from an icon during the revolution and purchased by the girl’s grandfather for a “length of smoked sausage and a box of German sweets.” In the cramped kitchen of her family’s Moscow apartment, this same girl is secretly reading forbidden verse when she meets an angel—or is he a god? “Do you want to be immortal?” he asks her. She says, “Yes.” The exhilarating opening chapters of Grushin’s latest novel are narrated by an unnamed heroine who can see through mundane reality—beneath it, beyond it—into other worlds. She is a poet. Scornful of the ordinary life her parents imagine for her, she travels from Russia to the United States. There, she experiences doomed love and the romance of suffering for one’s art. But—moment by moment, choice by choice—her commitment to immortality recedes until the passionate young poet telling her story disappears and re-emerges as “she,” a character observed from a distance, a woman who will soon come to be known as “Mrs. Caldwell.” It’s taken as a given that an upper-middle-class wife and mother cannot be an artist. There is magic, even in the suburbs; it’s just that Mrs. Caldwell can’t see it. But, at the same time, Grushin is too sly to be bound by cliché. If Mrs. Caldwell fails to be true to herself—and that “if” is sincere—this is because there are real questions about who that true self is. These are questions that women, especially, will recognize.

Honest, tender, and exquisitely crafted. A novel to savor.