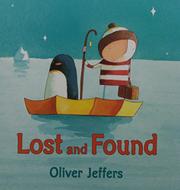 A lad finds a penguin on his doorstep and resolutely sets out to return it in this briefly told import.

Eventually, he ends up rowing it all the way back to Antarctica, braving waves and storms, filling in the time by telling it stories. But then, feeling lonely after he drops his silent charge off, he belatedly realizes that it was probably lonely too, and turns back to find it. Seeing Jeffers’s small, distant figures in wide, simply brushed land- and sea-scapes, young viewers will probably cotton to the penguin’s feelings before the boy himself does—but all’s well that ends well, and the reunited companions are last seen adrift together in the wide blue sea.