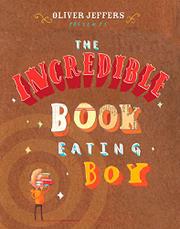 In a cautionary tale about the perils of unbridled bibliophagy, once young Henry discovers that the more books he eats the smarter he gets, he proceeds to gorge—and not only racks up humongous library fines, but ends up with both stomach and brains aboil with undigested content. Embarrassing incidents ensue. Painting and assembling scraps into collages on a wide range of papers, from the insides of tattered dust jackets to old official forms and yellowed graph paper, Jeffers crafts exuberantly raffish illustrations featuring a round-headed lad drawn in quick cartoon style. Ultimately, Henry comes to realize that it’s more enjoyable to read books than to eat them—though, as a chewed-away corner on the rear cover of this one reveals, he’s not immune to occasional backsliding. Dish this out to eager readers, with a grain of salt, and watch them snap it up. (Picture book. 6-8)