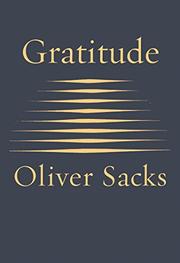 Valediction from the late neurologist and writer Sacks (On the Move: A Life, 2015, etc.).

In this set of four short essays, much-forwarded opinion pieces from the New York Times, the author ponders illness, specifically the metastatic cancer that spread from eye to liver and in doing so foreclosed any possibility of treatment. His brief reflections on that unfortunate development give way to, yes, gratitude as he examines the good things that he has experienced over what, in the end, turned out to be a rather long life after all, lasting 82 years. To be sure, Sacks has regrets about leaving the world, not least of them not being around to see “a thousand…breakthroughs in the physical and biological sciences,” as well as the night sky sprinkled with stars and the yellow legal pads on which he worked sprinkled with words. Sacks works a few familiar tropes and elaborates others. Charmingly, he reflects on his habit since childhood of associating each year of his life with the element of corresponding atomic weight on the periodic table; given polonium’s “intense, murderous radioactivity,” then perhaps 84 isn’t all that it’s cut out to be. There are some glaring repetitions here, unfortunate given the intense brevity of this book, such as his twice citing Nathaniel Hawthorne’s call to revel in “intercourse with the world”—no, not that kind. Yet his thoughts overall—while not as soul-stirringly inspirational as the similar reflections of Randy Pausch or as bent on chasing down the story as Christopher Hitchens’ last book—are shaped into an austere beauty, as when Sacks writes of being able in his final moments to “see my life as from a great altitude, as a sort of landscape, and with a deepening sense of the connection of all its parts.”

If that promise of clarity is what awaits us all, then death doesn’t seem so awful, and that is a great gift from Sacks. A fitting, lovely farewell.