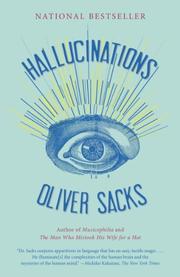 Acclaimed British neurologist Sacks (Neurology and Psychiatry/Columbia Univ.; The Mind’s Eye, 2010, etc.) delves into the many different sorts of hallucinations that can be generated by the human mind.

The author assembles a wide range of case studies in hallucinations—seeing, hearing or otherwise perceiving things that aren’t there—and the varying brain quirks and disorders that cause them in patients who are otherwise mentally healthy. In each case, he presents a fascinating condition and then expounds on the neurological causes at work, drawing from his own work as a neurologist, as well as other case studies, letters from patients and even historical records and literature. For example, he tells the story of an elderly blind woman who “saw” strange people and animals in her room, caused by Charles Bonnet Syndrome, a condition in with the parts of the brain responsible for vision draw on memories instead of visual perceptions. In another chapter, Sacks recalls his own experimentation with drugs, describing his auditory hallucinations. He believed he heard his neighbors drop by for breakfast, and he cooked for them, “put their ham and eggs on a tray, walked into the living room—and found it completely empty.” He also tells of hallucinations in people who have undergone prolonged sensory deprivation and in those who suffer from Parkinson’s disease, migraines, epilepsy and narcolepsy, among other conditions. Although this collection of disorders feels somewhat formulaic, it’s a formula that has served Sacks well in several previous books (especially his 1985 bestseller The Man Who Mistook His Wife for a Hat), and it’s still effective—largely because Sacks never turns exploitative, instead sketching out each illness with compassion and thoughtful prose.

A riveting look inside the human brain and its quirks.