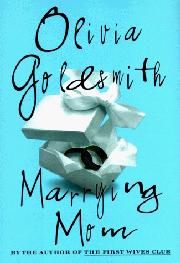 Goldsmith follows The Bestseller (p. 768) with a light, contrived romance about a Jewish mother and her three unsettled children. Mom is Phyllis Geronomous (nÇe Phyllis Steen, so Geronomous seems a big improvement), and she lives in South Florida. While at 69, she's no longer young, she finds little appealing about the lifestyle of her many elderly neighbors, who restlessly patrol the local boardwalk and look forward only to early-bird dinners at the Rascal House. Dedicated to finding something a little less terminal, Phyllis bids farewell to her dead husband Ira at the cemetery—he doesn't answer, but he never said a lot when he was alive either—and returns to New York City to get into the hair of her unhappy children: Sigourney (nÇe Susan), a 40ish stockbroker whose business and love life are falling apart; gay Bruce, whose ``Queer Santa'' greeting-card line is failing and whose lover won't commit to marriage; and fat, whiny Sharon, whose husband Barney is a deadbeat. Guilty because she never had time to go to PTA meetings, Phyllis now wants to fix their lives. At the same time, they want her out of their hair and back with the palm trees. So, the three launch Operation Geezer Quest to find Phyllis a rich husband, complete with a Bergdorf Goodman makeover and a suite at the Pierre. Along the way, with enough Yiddish for a whole season of The Nanny, Phyllis doles out tough love and wise words. Finally, everyone's life is improved, and Mom begins her eighth decade with good sex, a large sapphire ring, and an offshore bank account in the Caymans. Some laughs and refreshing senior-citizen romance, but more like the outline for a TV sitcom than a novel. (Film rights to Paramount; Literary Guild Selection; $175,000 ad/promo; TV and radio satellite tours)