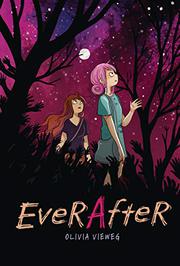 Seeking a friend and forgiveness at the end of the world.

It’s been two years since the zombielike outbreak started, but life in the walled city of Weimar, Germany, is relatively safe. The hospital warden dotes on once-blond Vivi, even obtaining pink hair dye for her, but nevertheless sends her to the barricade to help fend off the hungry hordes. After a bite puts a sudden end to a fleeting new friendship, Vivi ends up on the run with irritated (and now infected) fellow fighter Eva. Caught in the wilderness beyond the walls, auburn-haired Eva repeatedly and reluctantly saves the hapless Vivi. Opposites in lethality, both are haunted by the dead—Vivi by those she couldn’t save and Eva by those she’s killed. The palette is vivid and warm, an unusually cheerful choice for a typically bleak subject, with hints of a manga influence. Although the undead—here, blank-eyed biters, some sprouting vines and tendrils—follow the usual zombie behaviors, the tale deviates from some standard tropes, beginning in media res, with characters aware of the infection but not all-knowing, and throwing a curveball of a conclusion. Offering minimal history and concrete context, Vieweg offers an art-house take on a normally gory and typically action-packed subject and focuses on the now, rather than the how, of the apocalypse. Main human characters are white.

A melancholic but multicolored apocalyptic tale told with originality.