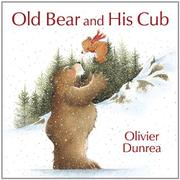 OLD BEAR AND HIS CUB

“Old Bear loved his Little Cub with all his heart. Little Cub loved Old Bear with all his heart.” But each time Old Bear tells Little Cub to do something, his refusal becomes a verbal tug-of-war over who knows best. “Tie your scarf tight around your neck. You might catch cold.” “No, I won’t.” “Yes, you will.” “No, I won’t!” Little Cub refuses to eat his porridge, be careful at the top of a rock or take a nap. They both fall asleep in a snowy meadow (despite Little Cub's objections), and when Old Bear wakes up, he has a cold. Now Little Cub becomes the admonisher in this lovingly depicted role reversal. The just-right spare text and pencil-and-gouache illustrations are set against spacious white backgrounds that focus readers’ attention on subtle expressions (and not-so-subtle ones, such as the amusing glare-off between grizzled, nap-refusing Old Bear and fierce Little Cub) and colorful touches, like Little Cub’s red scarf. The adult-child give-and-take in this charming bedtime story will be quite familiar and is bound to bring smiles to both ages. Simplicity at its best. (Picture book. 4-7)