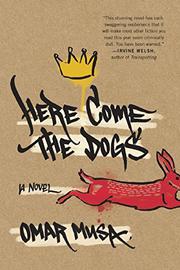 Three immigrants battle the heat, society, and their own predispositions toward conflict during one long, hot summer in rural Australia.

Poet and rapper Musa is a certifiable rock star in his native Australia, and he definitely brings a frenetic intensity to his debut novel about coming of age in a land of strangers. The novel bounces its vibrating focus among three main characters, all of whom are distinctly drawn. For sheer swagger, there’s Solomon, a rapper, poet, and basketball player of Samoan origin. We get inside his head through interstitial interludes where he waxes poetic on girls, his buddies, and street life. “Wish we had a white person with us,” he muses. “Ten empty cabs have passed us by.” Our tortured soul is Aleks, a house painter from Macedonia whose domestic life with his wife and kid is disrupted by his predilection for graffiti and crime that pays. The sensitive one is Solomon’s half brother, Jimmy, another disenfranchised young man whose lack of connection to the world is starting to mess with his head. There’s not a lot of momentum to the plot beyond Solomon and Jimmy’s run-in with Damien Crawford, a government minister out to upend the country’s Racial Discrimination Act. A lot of the book is just about getting through the day, whether it’s drinking, messing around with the girls the book primarily views as ornaments, or suffering under the blazing Australian sun. But what the book may lack in narrative cohesion, it surely makes up in style, with its relentless pace and fierce ruminations on what it means to be a man. “You gotta keep calm,” Solomon tells a kid he’s teaching about the game. “Keep your composure. In this world, they’re plenty of people trying to get you angry. Make you lose it. Never give in to ’em.”

A bravado novel about survival and rebirth in a subculture that moves to its own rhythms.